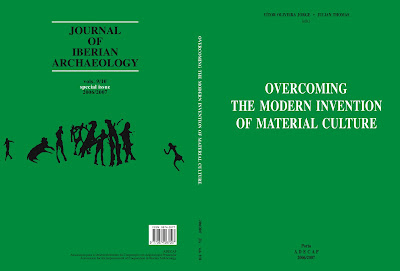 To get this book: portico@porticolibrerias.es

The online version of this article can be found at:

of the dualism underlying the expression

‘material culture’, a concept that has dominated

much of archaeological research over

the last decades, while coming to designate a

by addressing the fact that words are

discussing and revising conceptual labels are

a constitutive aspect of any research agenda.

Collected here are the presentations given at

the 2006 TAG meeting in Exeter. An article by

was pre-circulated among the participants.

This enabled the authors to engage more thoroughly

with Ingold’s critique of the distinction

between a ‘material’ and a ‘cultural’ order

implied in the term, and the seemingly spurious

attempts to overcome it that are concealed

as a background for their discussions.

one of the main voices rising against the delusions

and his ideas are insightful and operative in

pushing the discipline forward. Yet there is

largely a suspicious attitude, as if archaeologists

and other scholars concerned with materials

required a ‘detective’ to highlight the

tracks of taken-for-granted categories. This

suspiciousness is a common thread uniting the

articles, as most of the chapters open by indicating

how previous or current approaches to

things are ‘still modern’ even when claiming

not to be so, before outlining their proposed

ways to move forward. However, one of the

greatest shortcomings of this otherwise worthy

endeavour is the fact that only a few articles

address this question through an engagement

Many of the chapters that do engage with

materials seem to use them as excuses for discussing

theoretical positions in ways that

and, in general, the book does not provide the

reader with an adequate sense of the unavoidable

presence of materials in past worlds.

While authors steadfastly reiterate that things

are ‘gatherings’, ‘bundles of relations’, or ‘convergences’,

they are nevertheless relegated to

the background of these exciting ideas. This

contradiction at the heart of the book reminds

us of earlier projects in archaeology, and

Indeed, this agenda seems in line with early

postprocessual critique, when the ‘archaeological

unconscious’ was the preferred target of

analysis and the tangible order somehow

receded in the background, as an excuse or

action in both the past and the present. As I

have just said, whilst the critique of categories

is necessary work and thus constitutive of our

craft (and I have engaged in such a tracking

myself), one wonders whether the project is

running counter to its own propositions. For if

our knowledge of the world is embodied, and

thinking does not take place outside our

involvement in the world, one must assume

that binary categories are somehow a part of

our intersubjective, embodied existence. That

is, binaries may not only be a manifestation of

hegemonic thinking, but also a part of how we

experience the world in which we are brought

into being. Therefore, how can we claim to

‘overcome’ them? And isn’t this aspiration to

dialectical and modern? This means that

since our resources are polluted, the critical

examination of the conditions and parameters

of knowledge production is necessarily a collective

endeavour. Yet this can only work effectively

if we find ways of not only discussing,

but also of researching and writing that fully

embrace materials and their complexities.

The relevant question is perhaps how to

deconstruct the categories in ways that are

more sensitive to the experience of other

societies (as well as our own), while avoiding

the pitfalls of either reifying difference (both

in the past and the present), or seamlessly

connecting the past and present in genealogies

One of the preferred paths chosen by the

authors has been to use ethnography as suggestive

of potentialities in human societies.

Although offering new understandings that are

helpful in highlighting the richness of human

experience beyond what has been delineated

by Modernity, many times the ideas put forward

by these works are discussed without

fully engaging with their relevance to the contexts

under study. In other words, a lifeworld –

formed by elements of various kinds – may

afford particular material textures that may or

may not be similar to what the particular

Whilst ethnography allows us to think differently

about our materials, we need to go further

and actually trace the assemblages and

gatherings of things, and the relations that create

the very fabric of things. Admittedly, this

task exceeds the limits imposed by the conference

format, but some chapters in the volume

have managed to introduce interesting discussions

despite space limitations (e.g. chapters by

This might be related to a limited view of

materiality, which seems to be understood as a

discursive mask preventing us from seeing that

things emerge from a field of relations and

incorporate in their formthe processes by which

they come into being. ‘Materials’ (or ‘artefacts’:

word to describe such a process. ‘Material culture’

assumes that materiality (as physicality) is

impenetrable, only wrapped around by culture

(as the imposition of meaning), and in this view,

the recent use ofmateriality in social theory continues

This is of course a very valid point that

may never be covered satisfactorily by any

single perspective. Although this could be

accused of spinning the discussion into superficial

semantics, I have argued elsewhere that

materiality is a necessary word to address the

relationality of the world (Lazzari 2005). It

implies a different way of conceiving the tangible,

beyond function and technicality,

but including the capacities of the physical

and action. Artefacts help us enter beyond

the physical into the realm of the imaginary in

generated by lived bodies rather than

detached consciousnesses. In this sense, the

tangible is not something to be transcended in

order to create meaning. In line with what

most of the authors of the book argue, the tangible

is itself an emergent property of myriad

lived relations of various orders and kinds. Yet

unlike many of the authors, materiality as a

concept enables our immersion in such orders

and kinds without forgetting the tangible. Our

thick descriptions of past lifestyles should

engage with the full life of artefacts, even

when their various performances as active

bodies may have been apparently contradictory.

between classes of materials; only in

relation to each other (and to other elements

of the lifeworld) do artefacts reveal their

between material classes and past practices

may reveal the multi-layered nature of

between representational projects and their

dissolution). Such an angle may be missed

from an analysis that focuses on single material

classes that only have dialogue with contemporary

The concern about the relational constitution

of the tangible and the multiplicity of

things has a long and more complex genealogy

than the authors seem to accept. Merleau Ponty

and things in the fabric of the world. Lefebvre

fields of relation; a lived fabric of rhythms and

relationships learned and understood through

a ‘suspect’ of Cartesianism, preceded recent

inquiries into the etymology of the word ‘matter’,

highlighting the animated and relational

understandings that had been erased by modern

thinking. Even Marx – another suspect –

behind the conceptual separation of mind and

dualisms ‘the necessary enemy, the furniture

we are forever rearranging’. Overcoming our

entrenched conceptualizations of the world is

an ongoing project that travels back and forth,

therefore all efforts should be welcome. This

volume succeeds at introducing a necessary

discussion and encourages a promising disciplinary

shift toward relational ontology; yet

by keeping materials in the background it may

undermine the broader impact, both in the

discipline and beyond, that it seeks to achieve.

Environment: Essays on Livelihood, Dwelling and 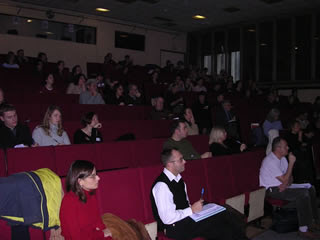 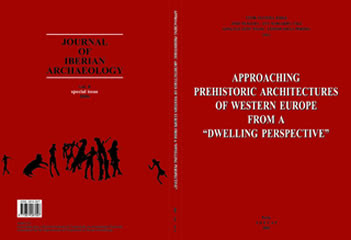 A moment of the session organized by Vítor O. Jorge and the publication that resulted from that session - a book that is also a special issue of Journal of Iberian Archaeology, 2006, vol. 8.
Publicada por Vitor Oliveira Jorge à(s) terça-feira, dezembro 08, 2009 Sem comentários:

Some papers published in JIA available on line