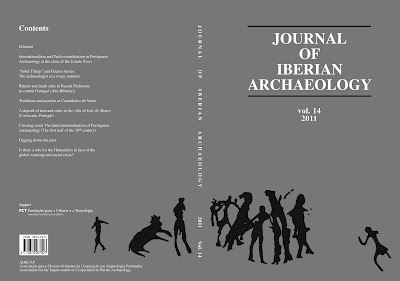 This is probably the last issue of this journal on paper. But, do not worry, because in spite of – and as a response to - the lack of material means that force us to take that option, we will try to keep it in electronic format from 2012 on.

2011 was a busy and productive year for ADECAP and some of its members. Let’s mention just a few topics.

On 28th and the 29th January Lesley McFadyen (now in the Birkbeck Institute, University of London) and Sérgio Rodrigues (FLUP) have organized in the Faculty of Arts of the University of Porto an interesting Portuguese-British workshop under the theme “Time, Space, Practice and Subject in the Prehistoric Past.” Several British colleagues and friends were then with us, allowing an exchange of information and approaches between people interested in prehistoric architectures. Actually, this theme has been a constant element of relationship and collaboration between all of us, in particular people from Manchester and Porto universities.

Elections for those that will be in charge of the association for the period of 2011-2012 have taken place in Porto (Centro Unesco, where currently our meetings occur) on the 26th March 2011. You can find all that information in our blog: http://adecap.blogspot.com

On the 26th February Joana Alves Ferreira offered a lecture on the problematic of the so called “Neolithic”, where she tried (in my view, with success) to criticise the underpinnings of this concept, so typical of our Western way of conceiving prehistory.

On the 26 March, it was José Manuel Varela that presented his lecture on prehistoric architectures, taking as a basis his long experience in the excavations of the Foz Côa “Copper Age” hill precincts.

The president of the direction made several travels abroad (Madrid, Valencia, Canary Islands, London – 2 weeks in June/July, Brazil – 3 weeks in September) taking contact with archaeological and heritage realities, and also with a great number of colleagues of many other disciplines. That was a very enriching experience.

As usually, in July, 5 weeks of (very interesting) excavations have taken place in the prehistoric precinct of Castanheiro do Vento, Vila Nova de Foz Côa, which has been excavated without interruption since 1998.

The president of the association has given his course on contemporary critical thought (Lacan, Foucault, Derrida, Butler, Agamben, Zizek, Baudrillard e Lyotard) in the Faculty of Arts of Porto (April-June) and in Lisbon (Ler Devagar Bookshop – October-December).

And, finally, we intend to launch this issue of JIA in the Faculty of Arts of the University of Porto on the 15th December, just before a lecture by Patrícia Bruno (Escola Superior Gallaecia, Vila Nova de Cerveira) on the earthen prehistoric architectures of the South of Portugal (theme of her PhD dissertation).

It sounds a nice series of initiatives and activities in a year in which the so-called “crisis” touched Portugal so strongly and so traumatically.

I finish these introductory lines with an appeal to those who saw with enthusiasm the birth of ADECAP and of JIA in the late 90’s. Please do not let us die! Help us by all means possible. Thank you all. I am myself committed to the effort of keeping doing all my best for the “spirit” that has animated us then.

Everybody now recognizes that we have tried, for decades, to build something different in Portuguese prehistoric archaeology, taking the city of Porto and its University as our logistic basis.

Younger ones have now the continuity and permanent renewal of this task in their hands. Speaking for myself, but also in the name of the association’s project, I believe in you. You may count on me as well.